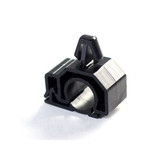 Located in the front of your truck next to your radiator, it's highly susceptible to damage from flying debris. If the interior isn't as cool as it should be, then the condenser could be clogged or leaking. To prevent clogging, the drier acts as a filter to prevent harmful debris from entering the condenser. Years of filtering will eventually result in the drier become clogged and allowing debris to enter the condenser. Shop our selection of air conditioning system components below to ensure your system is running the way it should be.

What Is An A/C Compressor?

The Duramax AC compressor is the system's power unit, which compresses the refrigerant before pumping it into the condenser. For the air-conditioning system to perform at its best, it requires a properly functional compressor. AC compressors are mounted to the accessory drive on the front of your engine and driven by an engine accessory belt. The compressor will not run at full capacity if the belt is worn and slips or if it's leaking refrigerant, resulting in a reduction in the amount of cold air entering the interior. The compressor clutch and internal components can also fail, resulting in a lack of cold air.

What Is An A/C Condenser?

The Duramax diesel AC condenser is a radiator located between the truck's grille and the engine radiator. The condenser allows the gaseous refrigerant to lose heat and return to a liquid state. The liquid refrigerant then circulates through the dashboard to the evaporator, where air blows over the cold liquid and cools the interior. If your interior doesn't feel as cool as it should, it could be caused by a blocked AC condenser or a malfunctioning cooling fan. A refrigerant leak in the condenser will also result in poor cooling.

What Is An A/C Drier?

The air conditioning drier on your Duramax diesel is a small metal can with an inlet and outlet. They're only employed in air conditioning systems with expansion valves. Driers are found in the system's high-pressure section, usually in the plumbing between the condenser outlet and the expansion valve inlet, though some are linked directly to the condenser. When neither oil nor refrigerant is required for system operation, the drier serves as a temporary storage container.