Catastrophic failure on CP4 fuel injection pumps on 2011-2016 LML Duramax trucks will send small metallic debris throughout the entire fuel system. To properly correct this, complete replacement of all affected fuel system components will be required. Our complete solution includes everything that is recommended to be replaced when this type of failure occurs.

This fuel system replacement kit includes a new CP4 fuel injection pump, fuel rails, fuel injectors, all of your hard fuels lines, all rubber fuel lines, and all of the gaskets and seals needed to complete the install. This kit requires no tuning and is EPA approved. This kit is designed to be a direct replacement for CP4 equipped 2011-2016 Duramax Diesel trucks.

The CP4 fuel injection pump in 2011-2016 Duramax trucks suffer high pressure fuel pump issues due to lack of lubrication. The CP4 was designed to be a more efficient pump than its predecessor, the CP3 pump. However, the CP4 proved to be less reliable than the CP3. An LML CP4 pump failure will present itself with a hard start or no start condition and can result in the following trouble codes: P0087, P0088, P0191, or P128E. This can be confirmed by removing the CP4 pump and fuel pressure regulator and checking for cracks and metal debris on the fuel pressure regulator screen. This comprehensive kit will replace all of the needed components when dealing with a CP4 pump catastrophic failure. 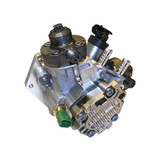